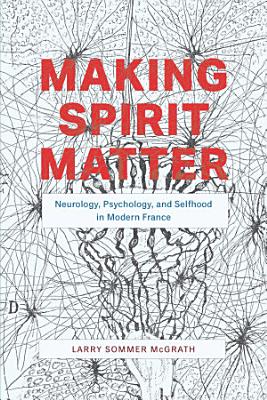 "The problem of the relation between mind and brain has been among the most persistent in modern Western thought, one that even recent advances in neuroscience haven't been able to put to rest. Historian Larry McGrath's Making Spirit Matter is about how a particularly productive and influential generation of late nineteenth- and early twentieth-century French thinkers attempted to answer this puzzle by showing the mutual dependence of spirit and matter. The veritable revolution taking place across disciplines, from philosophy to psychology, located our spiritual powers in the brain and offered a radical reformulation of the meaning of science, spirit, and the self. Pulling out connections between thinkers such as Bergson, Blondel, and FouilleáI p1 se, among others, McGrath plots the intellectual movements that brought back to life themes of agency, time, and experience by putting into action the very sciences that seemed to undermine metaphysics and theology. In so doing, Making Spirit Matter lays bare the long legacy of this moment in the history of ideas and how it might renew our understanding of the relationship between mind and brain"--

Spirit Matters presents the results of unique research into how Australians make sense of life. Written in an accessible style for a wide audience, this book counts and compares those making use of religious frameworks, alternative spiritualities, and largely secular approaches. How we make sense of life is both diverse and challenging. Spirit Matters then takes us deeper, pinpointing ways in which these different approaches can affect personal wellbeing and the common good. This study shows that some appraoaches are more helpful than others. How we make sense of life does matter. 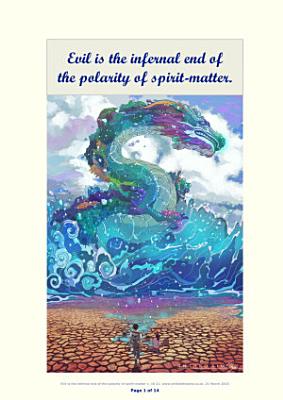 ﻿Devil-evil is a mighty motor in the struggle for life. See how the Christianity of Jesus Christ was degraded to “Church” Christianity. There are two Jesuses: The real Jesus, a Master of Wisdom, and Jesus travestied by pseudo-Christian fancy and clad in pagan robes borrowed from heathen gods. Unmanifested Logos is forever concealed. The “forever concealed” followed Thorah’s advice and did so arrange its forms as to become manifested as the Universe. And if Thorah, why not Satan? Evil is the dark side of good. Yet every goodness has its defect. Truth is mighty and will prevail. Every hitherto far-hidden truth, whether concealed by Nature or human craft, must and shall be revealed some day or other. 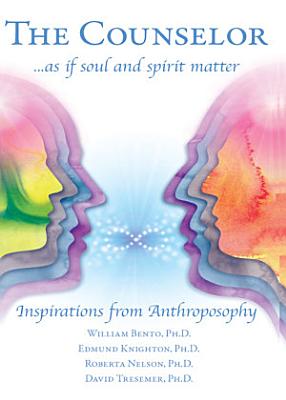 In an anthroposophic approach to counseling and psychotherapy, we integrate the whole paradigm of spiritual science into the contemporary forms of psychology, thereby re-formulating a psychology inclusive of body, soul, and spirit. —Dr. William Bento, Executive Director of Anthroposophic Psychology Associates of North America (APANA) The art of counseling is practiced in many settings. An uncle counsels a troubled niece. A licensed professional clinical counselor (LPCC) works in a treatment center for drug addicts. A counselor can also be everything in between the two. If you consider everyone who mentors another—from life-coaches to police officers to wedding planners to lawyers to intimate friends—counseling includes all of us. Whereas mainstream counseling psychology has been moving increasingly toward cognitive and pharmacological approaches, this book brings us back to a psychology of soul and spirit. Through the guidance of Anthroposophy, the becoming human being, and Sophia, and divine wisdom, counselors will rediscover here an approach to people that has the heart of soul, and the light of spirit. 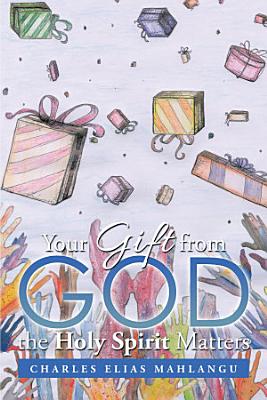 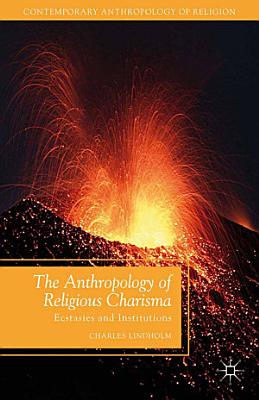 According to Max Weber, charisma is opposed to bureaucratic order. This collection reveals the limits of that formula. The contributors show how charisma is a part of cultural frameworks while retaining its ecstatic character among American and Italian Catholics, Syrian Sufis, Taiwanese Buddhists, Hassidic Jews, and Amazonian shamans, among others. 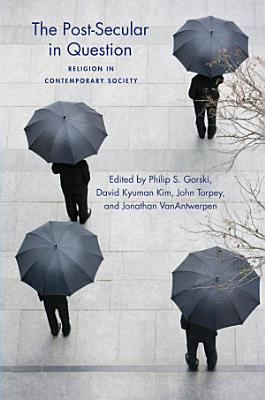 The Post-Secular in Question considers whether there has in fact been a religious resurgence of global dimensions in recent decades. This collection of original essays by leading academics represents an interdisciplinary intervention in the continuing and ever-transforming discussion of the role of religion and secularism in today’s world. Foregrounding the most urgent and compelling questions raised by the place of religion in the social sciences, past and present, The Post-Secular in Question restores religion to a more central place in social scientific thinking about the world, helping to move scholarship “beyond unbelief.” Contributors: Courtney Bender, Craig Calhoun, Michele Dillon, Philip S. Gorski, Richard Madsen, Kathleen Mahoney, Tomoko Masuzawa, Eduardo Mendieta, John Schmalzbauer, James K. A. Smith, John Torpey, Bryan S. Turner, Hent de Vries. 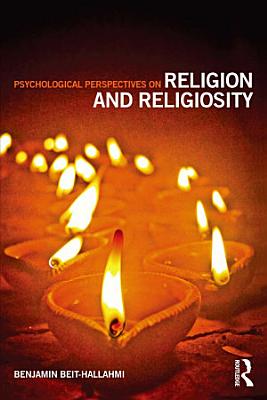 Is religion to blame for deadly conflicts? Should religious behaviour be credited more often for acts of charity and altruism? In what ways are religious and ‘spiritual’ ideas, practices and identities surviving and changing as religion loses its political power in those parts of the world which are experiencing increasing secularization? Written by one of the world’s leading authorities on the psychology of religion and social identity, Psychological Perspectives on Religion and Religiosity offers a comprehensive and multidisciplinary review of a century of research into the origins and consequences of religious belief systems and religious behaviour. The book employs a unique theoretical framework that combines the ‘new’ cognitive-evolutionary psychology of religion, examining the origins of religious ideas, with the ‘old’ psychology of religiosity, which looks at correlates and consequences. It examines a wide range of psychological variables and their relationship with religiosity. It is also provides fresh insights into classical topics in the psychology of religion, such as religious conversion, the relevance of Freud’s ideas about religion and religiosity, the meaning of secularization, and the crucial role women play in religion. The book concludes with the author’s reflections on the future for the psychology of religion as a field. Psychological Perspectives on Religion and Religiosity will be invaluable for academic researchers in psychology, sociology, anthropology, political science, economics, and history worldwide. It will also be of great interest to advanced undergraduate students and graduate students across the social sciences. 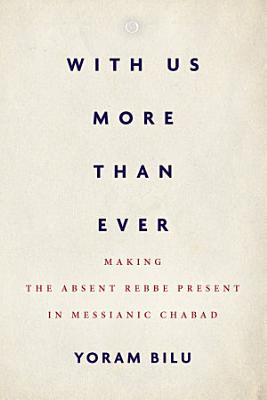 Rabbi Menachem Mendel Schneerson was the charismatic leader of the Chabad Hasidic movement and its designated Messiah. Yet when he died in 1994, the messianic fervor he inspired did not subside. Through traditional means and digital technologies, a group of radical Hasidim, the Meshichistim, still keep the Rebbe palpably close—engaging in ongoing dialogue, participating in specific rituals, and developing an ever-expanding visual culture of portraits and videos. With Us More Than Ever focuses on this group to explore how religious practice can sustain the belief that a messianic figure is both present and accessible. Yoram Bilu documents a unique religious experience that is distinctly modern. The rallying point of the Meshichistim—that the Rebbe is "with us more than ever"—is sustained through an elaborate system that creates the sense of his constant and pervasive presence in the lives of his followers. The virtual Rebbe that emerges is multiple, visible, accessible, and highly decentralized, the epicenter of a truly messianic movement in the twenty-first century. Combining ethnographic fieldwork and cognitive science with nuanced analysis, Bilu documents the birth and development of a new religious faith, describing the emergence of new spiritual horizons, a process common to various religious movements old and new. 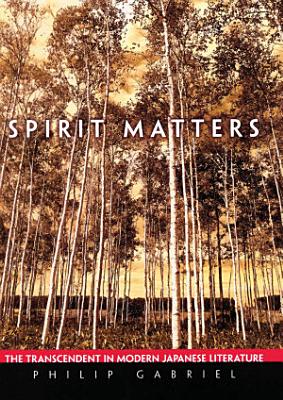 Spirit Matters is a ground-breaking work, the first to explore a broad range of writings on spirituality in contemporary Japanese literature. It draws on a variety of literary works, from enormously popular fiction (Miura Ayako’s Hyôten and Shirokari Pass and the novels of Murakami Haruki) to more problematic "serious" fiction (Ôe Kenzaburô’s Somersault) to nonfiction meditations on martyrdom and miracles (Sono Ayako’s Kiseki) and the dynamics of religious cults (Murakami’s interviews with members of Aum Shinrikyô in Underground). The first half of the volume focuses on the work of two women Christian writers, Miura Ayako and Sono Ayako. Combining a decidedly evangelistic bent with the formulas of the popular novel, Miura’s 1964 novel Hyôten (Freezing Point) and its sequel are entertaining perennial bestsellers but also treat spiritual issues—like original sin—that are largely unexplored in modern Japanese literature. Sono’s Kiseki (Miracles) and Miura’s Shiokari Pass focus on the meaning of self-sacrifice and the miraculous and survey both the paths by which people come to faith and the spiritual doubts that assail them. Perhaps most striking for Western readers, Gabriel reveals how Miura’s novel shows the lingering resistance to Christianity and its oppositional nature in Japan, and how in Kiseki Sono considers the kind of spiritual struggles many Japanese Christians experience as they try to reconcile their belief in a minority faith.