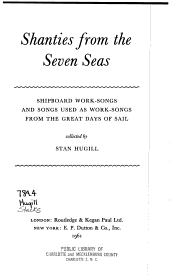 This book contains not only more than 400 sea shanties but as much of their history as Stan Hugill could collect in his extraordinary career as sailor, scholar, author, artist and inspiration to new generations of sea-music enthusiasts and performers.

The Shanty Book, Part I, Sailor Shanties by Richard Runciman Terry IT may reasonably be asked by what authority a mere landsman publishes a book on a nautical subject. I may, therefore, plead in extenuation that I have all my life been closely connected with seafaring matters, especially during childhood and youth, and have literally 'grown up with' shanties. My maternal ancestors followed the sea as far back as the family history can be traced, and sailor uncles and grand-uncles have sung shanties to me from my childhood upwards. During boyhood I was constantly about amongst ships, and had learnt at first hand all the popular shanties before any collection of them appeared in print. I have in later years collected them from all manner of sailors, chiefly at Northumbrian sources. I have collated these later versions with those which I learnt at first hand as a boy from sailor relatives, and also aboard ship. And lastly, I lived for some years in the West Indies, one of the few remaining spots where shanties may still be heard, where my chief recreation was cruising round the islands in my little ketch. In addition to hearing them in West Indian seaports, aboard Yankee sailing ships and sugar droghers, I also heard them sung constantly on shore in Antigua under rather curious conditions. When we try to picture to ourselves the intellectual and moral state of Europe in the Middle Ages, some fixed and almost stereotyped ideas immediately suggest themselves. We think of the nations immersed in a gross mental lethargy; passively witnessing the gradual extinction of arts and sciences which Greece and Rome had splendidly inaugurated; allowing libraries and monuments of antique civilisation to crumble into dust; while they trembled under a dull and brooding terror of coming judgment, shrank from natural enjoyment as from deadly sin, or yielded themselves with brutal eagerness to the satisfaction of vulgar appetites. Preoccupation with the other world in this long period weakens man's hold upon the things that make his life desirable. Philosophy is sunk in the slough of ignorant, perversely subtle disputation upon subjects destitute of actuality. Theological fanaticism has extinguished liberal studies and the gropings of the reason after truth in positive experience.

This book contains not only more than 400 sea shanties but as much of their history as Stan Hugill could collect in his extraordinary career as sailor, scholar, author, artist and inspiration to new generations of sea-music enthusiasts and performers. 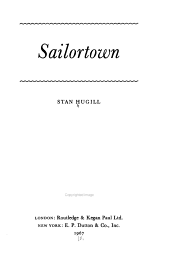 Informal history of waterfront districts and the way of life of the sailor in seaports the world over, illustrated with drawings by the author.

The perfect pocket reference for sea shanties and songs of the sea from the days of the great sailing ships. One hundred thirty traditional songs with music, arranged alphabetically and sized to conveniently fit in a coat pocket, sea bag, backpack, purse or back hip pocket.Easy to learn, these favorite songs can educate or entertain, or perhaps even accompany a working tall ship crew as they turn the capstan, haul on the bowline or splice the mainbrace.Work songs, play songs and all-around fun to sing songs ¿ for the sailor, singer and pirate in everyone.

Passed down in the oral tradition and sung as working songs, sea shanties tell the compelling human stories of life on the water: hard labor, battling the elements, pining for distant loves and far-away homes. The music?s rhythms are designed to galvanize the group effort of heaving, pushing, and pulling to weigh anchor, wind rope around a capstan, or set sail. Acclaimed shanty devotee Gerry Smyth presents the background to each shanty alongside musical notation. The lyrics are elaborated upon with explanations of terminology, context including historical facts and accounts of life at sea, and the characters, both fictional and nonfictional, that appear in the songs from the great age of sail to the last days of square-rig.