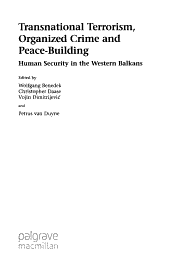 This volume investigates the role of the transnational terrorist and criminal organizations in the peace-building processes, with a particular focus on the Western Balkan region. Conducted within the framework of human security analysis, the research focuses on the security of the human being. 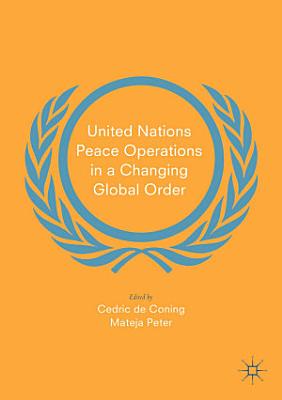 "This book is essential for enhancing one's understanding of international conflict and for the continued relevance of the UN as a key stakeholder and participant in world affairs." --Maj. Gen. Kristin Lund, Head of Mission and Chief of Staff, UN peacekeeping mission in the Middle East (UNTSO) "This outstanding collection is a must-read for anyone interested in the challenges of peacekeeping today." --Dr. Lise Howard, Georgetown University, USA "I would recommend this book to policy makers, peacekeepers and scholars who wish to understand and improve the effectiveness of modern peacekeeping." --Lt. Gen. Carlos Alberto dos Santos Cruz, former Force Commander in the UN missions in the DRC (MONUSCO) and Haiti (MINUSTAH) "This exceptional collection of analyses by experts from both the global North and South will be of interest to practitioners and scholars alike - highly recommended." --Prof. Ramesh Thakur, Australian National University This open access volume explores how UN peace operations are adapting to four trends in the changing global order: (1) the rebalancing of relations between states of the global North and the global South; (2) the rise of regional organisations as providers of peace; (3) the rise of violent extremism and fundamentalist non-state actors; and (4) increasing demands from non-state actors for greater emphasis on human security. It identifies emerging conflict and peace trends (robustness of responses, rise of non-state threats, cross-state conflicts) and puts them in the context of tectonic shifts in the global order (rise of emerging powers, North-South rebalancing, emergence of regional organisations as providers of peace). The volume stimulates a discussion between practitioners and academics, offering an analysis of how the international community collectively makes sense of the changing global order and its implications for UN peace operations. Cedric de Coning is Senior Research Fellow at the Norwegian Institute of International Affairs (NUPI), Norway and Senior Advisor for the African Centre for the Constructive Resolution of Disputes (ACCORD), South Africa. Mateja Peter is Lecturer at the University of St. Andrews, UK and Senior Research Fellow at the Norwegian Institute of International Affairs (NUPI), Norway. 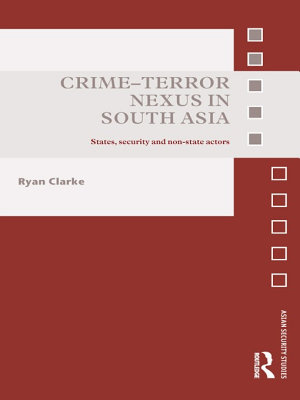 This book examines the crime-terror nexus in South Asia, focusing in particular on the activities of non-state actors that operate out of Pakistan, and challenges the conventional wisdom that the Pakistan Taleban (TTP) and Al-Qaeda are Pakistan’s most serious security threats. 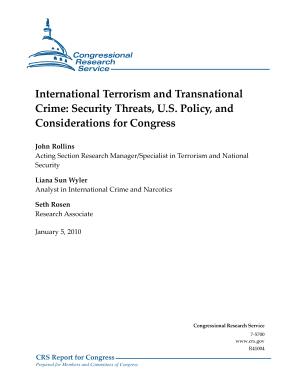 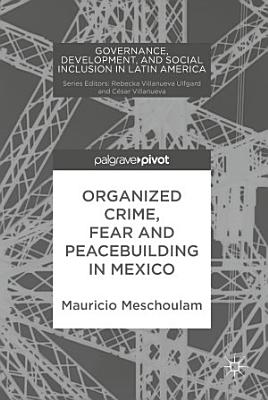 The book focuses on the psychosocial effects that organized crime related violence has produced in Mexico. It connects one of the major worries of our times – terrorism – with the conditions of peacelessness that prevail in Mexico. Specifically, the project explores the role played by fear as a peace disruptor, as well as one of the most important obstacles to social and democratic development, and inclusiveness. The volume contributes to the debate on whether the escalation of violence in Mexico since 2006 has produced circumstances similar to those countries that suffer terrorism, and to what degree that discussion can help in the construction of a more democratic and inclusive society. 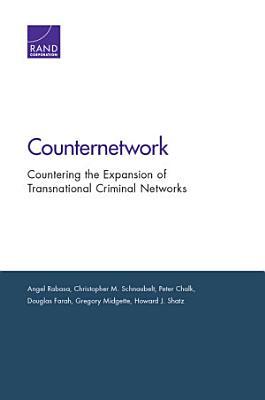 Through an analysis of transnational criminal networks originating in South America, this report presents operational characteristics of these networks, strategic alliances they have established, and the multiple threats that they pose to U.S. interests and to the stability of the countries where they operate. It also identifies U.S. government policies and programs to counter these networks and examines the military’s role in that context. 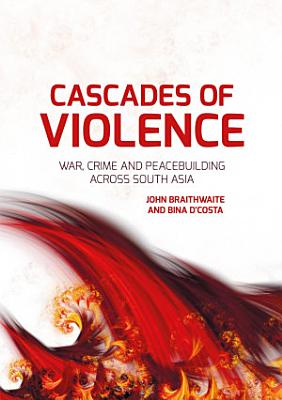 As in the cascading of water, violence and nonviolence can cascade down from commanding heights of power (as in waterfalls), up from powerless peripheries, and can undulate to spread horizontally (flowing from one space to another). As with containing water, conflict cannot be contained without asking crucial questions about which variables might cause it to cascade from the top-down, bottom up and from the middle-out. The book shows how violence cascades from state to state. Empirical research has shown that nations with a neighbor at war are more likely to have a civil war themselves (Sambanis 2001). More importantly in the analysis of this book, war cascades from hot spot to hot spot within and between states (Autesserre 2010, 2014). The key to understanding cascades of hot spots is in the interaction between local and macro cleavages and alliances (Kalyvas 2006). The analysis exposes the folly of asking single-level policy questions like do the benefits and costs of a regime change in Iraq justify an invasion? We must also ask what other violence might cascade from an invasion of Iraq? The cascades concept is widespread in the physical and biological sciences with cascades in geology, particle physics and the globalization of contagion. The past two decades has seen prominent and powerful applications of the cascades idea to the social sciences (Sunstein 1997; Gladwell 2000; Sikkink 2011). In his discussion of ethnic violence, James Rosenau (1990) stressed that the image of turbulence developed by mathematicians and physicists could provide an important basis for understanding the idea of bifurcation and related ideas of complexity, chaos, and turbulence in complex systems. He classified the bifurcated systems in contemporary world politics as the multicentric system and the statecentric system. Each of these affects the others in multiple ways, at multiple levels, and in ways that make events enormously hard to predict (Rosenau 1990, 2006). He replaced the idea of events with cascades to describe the event structures that 'gather momentum, stall, reverse course, and resume anew as their repercussions spread among whole systems and subsystems' (1990: 299). Through a detailed analysis of case studies in South Asia, that built on John Braithwaite's twenty-five year project Peacebuilding Compared, and coding of conflicts in different parts of the globe, we expand Rosenau's concept of global turbulence and images of cascades. In the cascades of violence in South Asia, we demonstrate how micro-events such as localized riots, land-grabbing, pervasive militarization and attempts to assassinate political leaders are linked to large scale macro-events of global politics. We argue in order to prevent future conflicts there is a need to understand the relationships between history, structures and agency; interest, values and politics; global and local factors and alliances.

Transnational crime is a recognized threat to national security, mostly due to their relation to terrorist organizations. The President has called for a Whole of Government approach to combatting the threat from Transnational Organized Crime (TOC). The Strategy written in 2011 illustrates the differences of TOCs in the different geo-political regions, however, it does not illustrate in detail the varying degrees of influence the military, and specifically the Army, will have in each of these regions, as a part of the whole of government principle. The focus of this study is on identifying the role of the Army in combatting TOC. It will identify the role of the TOC in the growth of terrorist organizations, and identify when is the best time to affect criminal organizations to protect our national interests. CONTENTS * CHAPTER 1 INTRODUCTION * Problem Background * Problem Statement * Purpose of the Study * Research Questions * Significance * Limitations * Delimitations * Theoretical Framework * Operational Definitions * Summary * CHAPTER 2 LITERATURE REVIEW * Introduction * Transnational Organized Crime in the U.S., Europe, and Abroad * Case Study: Colombia * Case Study: Mexico * Peacebuilding and Organized Crime: The Cases of Kosovo and Liberia * Conclusion * CHAPTER 3 RESEARCH METHODOLOGY * Introduction * Data Collection * Data Analysis * Threats to Validity * Conclusion * CHAPTER 4 DATA PRESENTATION AND ANALYSIS * Introduction * Operational Environment: Current U.S Policy against TOC * Line of Operation 1: Colombia Case Study * Line of Operation 2: Mexico Case Study * Line of Operation 3: Liberia and Western Africa Case Study * Line of Operation 4: Kosovo Case Study * End State: Whole of Government Approach * Role of the Military * Conclusion * CHAPTER 5 CONCLUSIONS AND RECOMMENDATIONS * Introduction * Conclusions * Recommendations * Recommendations for Further Research * REFERENCE LIST The concern over TOC is the convergence of criminal organizations, transnational movement, and the occasional mutual benefit they receive from alliance to terrorist organizations. This Strategy against this threat is "organized around a single unifying principle: to build, balance, and integrate the tools of American power to combat transnational organized crime and related threats to national security-and to urge our foreign partners to do the same". Along with an emphasis on this emerging threat, the U.S. national strategy addresses these problems by using a whole of government approach. Though the military will not take the lead in this effort, the role of the military will be one of support. The problem is how the U.S. military will effectively integrate with the strategy, or whether or not the military should be involved at all in this mission. The emergence of Regionally Aligned Forces for the military also presents a challenge for inter-cooperation amongst Combatant Commanders (COCOM), as TOC by its definition works beyond the boundaries of nation-states. If the military participates in a whole-of-government approach, the regional alignment of forces must be considered. Coordination will occur at the strategic level, and areas such as logistics and intelligence will require multiple coordinated efforts in order to be effective. This is normal during many different operations; the question is whether the cost-benefit is good enough to warrant such an effort. 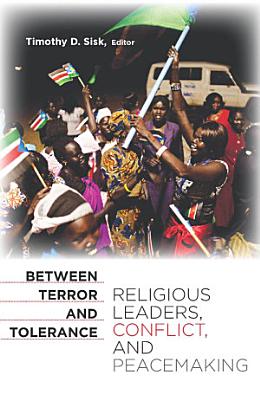 Civil war and conflict within countries is the most prevalent threat to peace and security in the opening decades of the twenty-first century. A pivotal factor in the escalation of tensions to open conflict is the role of elites in exacerbating tensions along identity lines by giving the ideological justification, moral reasoning, and call to violence. Between Terror and Tolerance examines the varied roles of religious leaders in societies deeply divided by ethnic, racial, or religious conflict. The chapters in this book explore cases when religious leaders have justified or catalyzed violence along identity lines, and other instances when religious elites have played a critical role in easing tensions or even laying the foundation for peace and reconciliation. This volume features thematic chapters on the linkages between religion, nationalism, and intolerance, transnational intra-faith conflict in the Shi’a-Sunni divide, and country case studies of societal divisions or conflicts in Egypt, Israel and Palestine, Kashmir, Lebanon, Nigeria, Northern Ireland, Sri Lanka, Sudan, and Tajikistan. The concluding chapter explores the findings and their implications for policies and programs of international non-governmental organizations that seek to encourage and enhance the capacity of religious leaders to play a constructive role in conflict resolution.