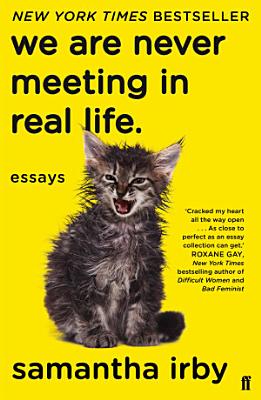 'I cannot remember the last time I was so moved by a book. We Are Never Meeting in Real Life is as close to perfect as an essay collection can get.' - Roxane Gay, New York Times bestselling author of Difficult Women and Bad Feminist In this painfully funny collection, Samantha Irby captures powerful emotional truths while chronicling the rubbish bin she calls her life. From an ill-fated pilgrimage to Nashville to scatter her estranged father's ashes to awkward sexual encounters to the world's first completely honest job application, and more, sometimes you just have to laugh, even when your life is permanently pear-shaped.

Funny Gag Gift Idea for Your Friends, Coworkers and BossAre you looking for a funny gift for a coworker or friend? This is a blank, lined journal with floral cover that makes a perfect gag gift for friends, coworker and family, male or female. Other features of this notebook include: 120 pages 6x9 inches, Excellent and thick binding Durable white paper Sleek, matte-finished cover for a professional look. This blank lined notebook is a convenient and perfect size to carry anywhere for writing and note taking. If you would like an unlined journal, please take a look at our other products for great gift ideas. 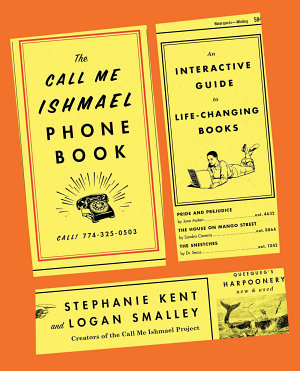 For fans of My Ideal Bookshelf and Bibliophile, The Call Me Ishmael Phone Book is the perfect gift for book lovers everywhere: a quirky and entertaining interactive guide to reading, featuring voicemails, literary Easter eggs, checklists, and more, from the creators of the popular multimedia project. The Call Me Ishmael Phone Book is an interactive illustrated homage to the beautiful ways in which books bring meaning to our lives and how our lives bring meaning to books. Carefully crafted in the style of a retro telephone directory, this guide offers you a variety of unique ways to connect with readers, writers, bookshops, and life-changing stories. In it, you’ll discover... -Heartfelt, anonymous voicemail messages and transcripts from real-life readers sharing unforgettable stories about their most beloved books. You’ll hear how a mother and daughter formed a bond over their love for Erin Morgenstern’s The Night Circus, or how a reader finally felt represented after reading Gene Luen Yang’s American Born Chinese, or how two friends performed Mary Oliver’s Thirst to a grove of trees, or how Anne Frank inspired a young writer to continue journaling. -Hidden references inside fictional literary adverts like Ahab’s Whale Tours and Miss Ophelia’s Psychic Readings, and real-life literary landmarks like Maya Angelou City Park and the Edgar Allan Poe House & Museum. -Lists of bookstores across the USA, state by state, plus interviews with the book lovers who run them. -Various invitations to become a part of this book by calling and leaving a bookish voicemail of your own. -And more! Quirky, nostalgic, and full of heart, The Call Me Ishmael Phone Book is a love letter to the stories that change us, connect us, and make us human. 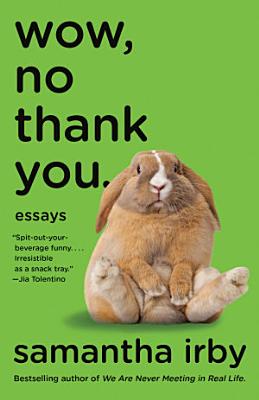 A Vintage Paperback Original. A new rip-roaring essay collection from the smart, edgy, hilarious, unabashedly raunchy, and bestselling Samantha Irby. Irby is forty, and increasingly uncomfortable in her own skin despite what Inspirational Instagram Infographics have promised her. She has left her job as a receptionist at a veterinary clinic, has published successful books and has been friendzoned by Hollywood, left Chicago, and moved into a house with a garden that requires repairs and know-how with her wife in a Blue town in the middle of a Red state where she now hosts book clubs and makes mason jar salads. This is the bourgeois life of a Hallmark Channel dream. She goes on bad dates with new friends, spends weeks in Los Angeles taking meetings with "tv executives slash amateur astrologers" while being a "cheese fry-eating slightly damp Midwest person," "with neck pain and no cartilage in [her] knees," who still hides past due bills under her pillow. The essays in this collection draw on the raw, hilarious particulars of Irby's new life. Wow, No Thank You is Irby at her most unflinching, riotous, and relatable. 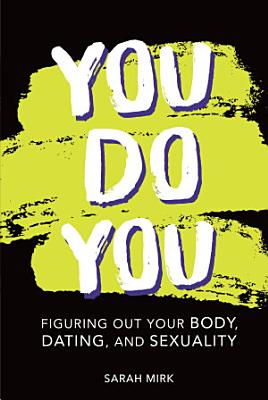 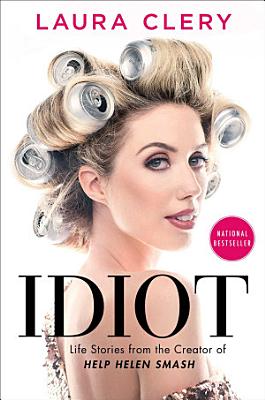 From YouTube star and Facebook Video sensation Laura Clery comes a collection of comedic essays in the vein of We Are Never Meeting in Real Life by Samantha Irby and You’ll Grow Out of It by Jessi Klein. Laura Clery makes a living by sharing inappropriate comedy sketches with millions of strangers on the Internet. She writes songs about her anatomy, talks trash about her one-eyed rescue pug, and sexually harasses her husband, Stephen. And it pays the bills! Now, in her first-ever book, Laura recounts how she went from being a dangerously impulsive, broke, unemployable, suicidal, cocaine-addicted narcissist, crippled by fear and hopping from one toxic romance to the next…to a more-happy-than-not, somewhat rational, meditating, vegan yogi with good credit, a great marriage, a fantastic career, and four unfortunate-looking rescue animals. Still, above all, Laura remains an amazingly talented, adorable, and vulnerable, self-described…Idiot. With her signature brand of offbeat, no-holds-barred humor, Idiot introduces you to a wildly original—and undeniably relatable—new voice. 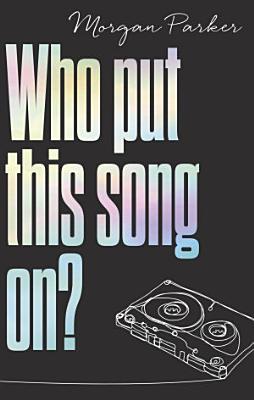 'A brilliant debut of black girlhood and mental health; at turns unflinchingly irreverent, laugh out loud funny and heartbreakingly honest' Elizabeth Acevedo, bestselling author of The Poet X 'Morgan Parker put this song on - and I hope it never turns off' Nic Stone, bestselling author of Dear Martin 'It's perfect' Samantha Irby, bestselling author of We Are Never Meeting in Real Life 'I love this book' Julie Buntin, author of Marlena Trapped in sunny, stifling, small-town suburbia, seventeen-year-old Morgan knows why she's in therapy. She can't count the number of times she's been the only non-white person at the sleepover, been teased for her "weird" outfits, and been told she's not "really" black. Also, she's spent most of her summer crying in bed. So there's that, too. Lately, it feels like the whole world is listening to the same terrible track on repeat - and it's telling them how to feel, who to vote for, what to believe. Morgan wonders, when can she turn this song off and begin living for herself? Life may be a never-ending hamster wheel of agony, but Morgan finds her crew of fellow outcasts, blasts music like there's no tomorrow, discovers what being black means to her, and finally puts her mental health first. She decides that, no matter what, she will always be intense, ridiculous, passionate, and sometimes hilarious. After all, darkness doesn't have to be a bad thing. Darkness is just real. Loosely based on her own teenage life and diaries, Morgan Parker's WHO PUT THIS SONG ON? is an outstanding debut, full of courage, generosity and reasons to live. 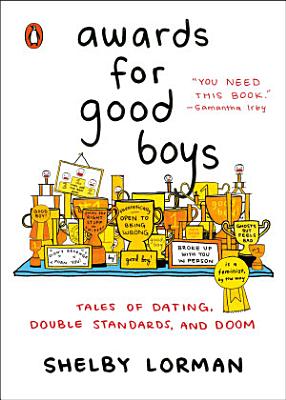 “Shelby and her art are extremely my shit. You need this book.” —Samantha Irby, New York Times bestselling author of We Are Never Meeting in Real Life “The rare Instagram-turned-book that actually works.” —Jezebel A wickedly funny illustrated look at living and dating in a patriarchal culture that celebrates men for displaying the bare minimum of human decency Surely you’re familiar with good boys. They’re the ones who put “feminist” in their Tinder bio but talk over you the entire date. They ghost you, but they feel momentarily guilty. They once read a book by a woman author. (It was required, but they thought it was “okay.”) And of course, they bravely condemn sexual harassment (except when the perpetrator is their buddy Chad). This book explores why so-called and self-proclaimed good boys are actually not so great, breaking down our obsession with celebrating male mediocrity and rewarding those who clear the very low bar of not being outwardly awful. Through clever illustrations and written vignettes, Awards for Good Boys makes literal the tendency to applaud men for doing the absolute least and offers hilarious and cathartic cultural commentary through which we may begin to unravel our own assumptions about gender roles and how we treat each other, both on and offline. 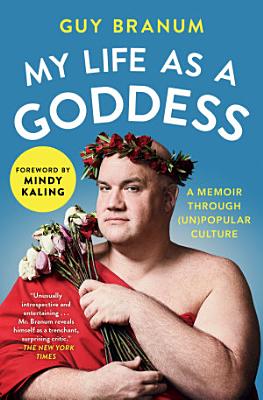 “Smart, fast, clever, and funny (As f*ck!)” (Tiffany Haddish), this collection of side-splitting and illuminating essays by the popular stand-up comedian, alum of Chelsea Lately and The Mindy Project, and host of truTV’s Talk Show the Game Show is perfect for fans of the New York Times bestsellers Why Not Me? by Mindy Kaling and We Are Never Meeting in Real Life by Samantha Irby. From a young age, Guy Branum always felt as if he were on the outside looking in. From a stiflingly boring farm town, he couldn’t relate to his neighbors. While other boys played outside, he stayed indoors reading Greek mythology. And being gay and overweight, he got used to diminishing himself. But little by little, he started learning from all the sad, strange, lonely outcasts in history who had come before him, and he started to feel hope. In this “singular, genuinely ballsy, and essential” (Billy Eichner) collection of personal essays, Guy talks about finding a sense of belonging at Berkeley—and stirring up controversy in a newspaper column that led to a run‑in with the Secret Service. He recounts the pitfalls of being typecast as the “Sassy Gay Friend,” and how, after taking a wrong turn in life (i.e. law school), he found stand‑up comedy and artistic freedom. He analyzes society’s calculated deprivation of personhood from fat people, and how, though it’s taken him a while to accept who he is, he has learned that with a little patience and a lot of humor, self-acceptance is possible. “Keenly observant and intelligent, Branum’s book not only offers uproarious insights into walking paths less traveled, but also into what self-acceptance means in a world still woefully intolerant of difference” (Kirkus Reviews, starred review). My Life as a Goddess is an unforgettable and deeply moving book by one of today’s most endearing and galvanizing voices in comedy.